Digimon Survive is currently available on PS4, but you might have noticed that we don’t have a review here on push square Again. This is unfortunately due to issues beyond our control, but after spending around six hours in-game, we thought it would be best to bring you some hands-on impressions ahead of the aforementioned review.

As the title of this article suggests, we’re a bit torn on Digimon Survive so far. The first two hours are incredibly slow as the title lays the groundwork for its story – introducing the main characters and establishing the kind of relationships they have with each other. Indeed, this is primarily a visual novel, but we found ourselves wishing there was more monster-vs-monster action.

The story begins with a group of Japanese high school students on a field trip in the countryside, but things go awry when the gang stumbles upon an ancient shrine dedicated to deity-like beasts. You can probably guess what will happen next, especially if you already know Digimon in franchise.

That’s right, kids find themselves trapped in an alternate reality where the titular creatures and their strange powers reign supreme. We have to admit that our interest in the narrative so far was starting to wane – on the surface the characters seem formulaic and the dialogue is a bit long – but once Agumon and his digital pals show up, things get a lot more entertaining.

Agumon – the yellow dinosaur digimon that’s sort of a mascot – isn’t just an effective tool to use in the title’s turn-based combat. He is a central part of the story, alongside other friendly Digimon who are introduced in the early chapters. It is something of a new dynamic insofar as Digimon games go, as the personalities of the monsters themselves are rarely explored outside of animated shows. Agumon and his allies are all voiced in Digimon Survive, and you can’t help but take advantage of their quirky and curious nature.

We can’t wait to see how this 30-hour adventure plays out, even if some of the game’s exploration elements already seem tedious. In typical visual novel fashion, you can often move from location to location in order to talk to specific characters or investigate the surrounding environment. Fortunately, Traversal is menu-based, but it still remains a lot backtracking to do to advance the plot, inch by inch. 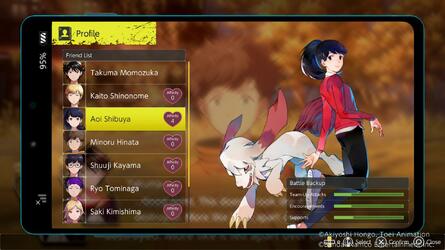 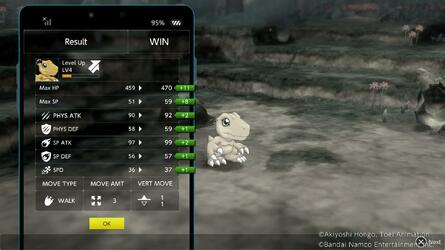 And it’s this somewhat clunky structure that gets in the way of Digimon Survive’s strategic battles. Story-based encounters have been very rare, which is a shame, because as is usually the case with Digimon games, the process of leveling up your monsters and expanding your team is a key selling point. We are already addicted to seeing the stats of our digimons increase.

So hopefully the dates get a little more fight-focused as the title continues. The system itself isn’t revolutionary – digimon move on a grid, and each attack has unique properties – but it looks pretty well done, the animations are nice, and it’s easy to figure out. Digivolution is also a factor – even at this early stage – as your partners can take on new forms to temporarily increase their power. With over 100 Digimon to discover (according to the game’s database), it’s safe to say we’re excited to see the sequel.

It’s clear that Digimon Survive has the potential to be a unique and engaging game. Digimon title, with its emphasis on player choice, character interaction, and tactical combat – but the pacing needs to improve sooner rather than later. We get that visual novels can be a slow burn, and that’s fine, but in a game that asks you to engage in RPG elements like leveling and collecting creatures, wordy dialogue, and tedious exploration. can quickly overstay their welcome.

Watching Digimon Survive? If all goes according to plan, we’ll have a full review for you in the near future, but until then, let us know if Agumon is ready to be your best friend in the comments section below.

We use cookies on our website to give you the most relevant experience by remembering your preferences and repeat visits. By clicking “Accept All”, you consent to the use of ALL the cookies. However, you may visit "Cookie Settings" to provide a controlled consent.
Cookie SettingsAccept All
Manage consent

This website uses cookies to improve your experience while you navigate through the website. Out of these, the cookies that are categorized as necessary are stored on your browser as they are essential for the working of basic functionalities of the website. We also use third-party cookies that help us analyze and understand how you use this website. These cookies will be stored in your browser only with your consent. You also have the option to opt-out of these cookies. But opting out of some of these cookies may affect your browsing experience.
Necessary Always Enabled
Necessary cookies are absolutely essential for the website to function properly. These cookies ensure basic functionalities and security features of the website, anonymously.
Functional
Functional cookies help to perform certain functionalities like sharing the content of the website on social media platforms, collect feedbacks, and other third-party features.
Performance
Performance cookies are used to understand and analyze the key performance indexes of the website which helps in delivering a better user experience for the visitors.
Analytics
Analytical cookies are used to understand how visitors interact with the website. These cookies help provide information on metrics the number of visitors, bounce rate, traffic source, etc.
Advertisement
Advertisement cookies are used to provide visitors with relevant ads and marketing campaigns. These cookies track visitors across websites and collect information to provide customized ads.
Others
Other uncategorized cookies are those that are being analyzed and have not been classified into a category as yet.
SAVE & ACCEPT